Lawrence Cabin is the oldest free-standing domestic building in Haverford Township.  Built sometime between 1690 and 1710,  it was the home of Henry Lawrence, a Welsh Quaker, and 5 generations of the Lawrence family until the middle of the 20th century.  The Cabin’s construction reflects elements of Swedish, Finnish, Welsh, and English log cabin design.  For a time, it was part of the “House of Three Generations”, so called because of two structures added on to the Cabin.  In 1961, having been saved from being torn down, it was disassembled, moved from its original site at Old West Chester Pike and Lawrence Road, and reassembled at its current location on Karakung Drive next to Nitre Hall. 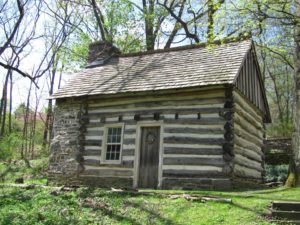